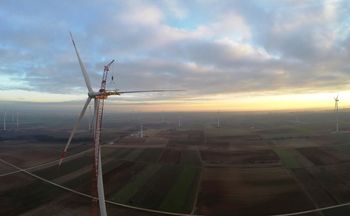 The “Record-breaking wind turbine” is installed in the South of Rhineland-Palatinate.

A well-timed start. Shortly after the 20th anniversary of the company, which was celebrated last year, juwi has broken through the barrier of 2,000 megawatts of installed power in the onshore wind sector. Calculations show that the wind farms built by juwi are sufficient to supply power to more than a million households. The record-breaking wind turbine, a Vestas V126 unit, is installed in the Gollenberg wind farm in Rhineland Palatinate (district of Südliche Weinstraße). It was commissioned this morning.

More than 900 units throughout the world

Over the past 20 years, juwi has installed more than 900 wind turbines at a total of about 150 locations throughout the world. The key projects include the Guanacaste wind farm in Costa Rica. In the Valle Central, a wind-rich area, juwi commissioned 55 Enercon E-44 wind turbines in 2009 – one of the largest wind energy projects in Latin America. The project development company also built wind farms in Uruguay, the USA, Poland and France. juwi’s largest wind projects in Germany are both located in the Hunsrück hills. In 2012, juwi commissioned the 70.5-megawatt wind farm at Ellern. The Kirchberg wind farm in Faas with 23 Enercon E-82 turbines was commissioned the same year. Almost all the 900 wind turbines are monitored and controlled by juwi Operations & Maintenance GmbH.

END_OF_DOCUMENT_TOKEN_TO_BE_REPLACED

Pan African has entered into an engineering, procurement and construction agreement with juwi South… more