The Hamburg-based CEE reaches a new milestone – with its latest acquisition, the asset manager has increased its portfolio to 50 wind and solar farms. The total capacity of all renewable energy sources under the management of CEE has therefore risen to ab 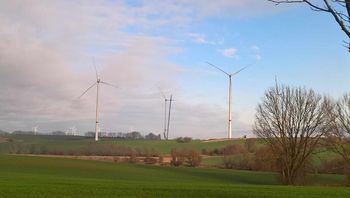 The Hamburg asset manager CEE continues to expand its portfolio and has acquired the Schmölln wind farm in Brandenburg. The seller is juwi Energieprojekte GmbH. The wind farm consists of four turbines (Vestas V126). The hub height is 137 m and the rotor diameter 126 m. The wind farm’s total capacity amounts to 13.2 megawatts (MW). CEE Operations GmbH will be responsible for the commercial management, while juwi Operations & Maintenance GmbH will oversee the technical operations.

This is the sixth project that CEE and juwi have successfully implemented together. Detlef Schreiber, CEO of the CEE Group says: “By acquiring the Schmölln wind farm, we have again managed to expand our portfolio in an extremely challenging environment. Working jointly with our reliable partners, we also plan to grow outside our core markets.”

Michael Class, the juwi Group’s CEO, says: Schmölln is the first wind farm that juwi has implemented in Brandenburg. We are therefore delighted to have handed it over to a long-standing partner.” In order to slow climate change with further wind energy projects in the future, Class calls for early improvements in the current design of the tendering system: “To correct the impending market distortions from 2017, changes are required, including a special tendering system for wind energy, as is set out, for example, in the paper on the exploratory talks to form a grand coalition. This must now be put into effect!”

In 2017, CEE energy farms will probably produce about 970,000 megawatt hours (MWh) of energy from renewable sources and thus deliver green power to some 230,000 four-person households. CEE’s CEO Detlef Schreiber remarks: “It is impressive to see that our 50 wind and solar farms could theoretically supply all the inhabitants of the financial metropolis Frankfurt am Main with renewable energy.”

CEE’s energy parks are located in Germany, France and the UK. With annual revenue of about EUR 100 million, CEE remains one of the largest independent producers of green power in Germany. CEE’s 22 wind farms and 28 solar farms each account for about one half of revenue in Germany and other countries. The biggest project is in Alhorn in Niedersachsen (Lower Saxony). There, solar cells were installed on the former airfield of a now disused regional airport. Under ideal conditions, they can generate more than 50 MW.