The system is the largest juwi plant in Greece so far. Technical features are reducing production costs for climate-friendly energy further. 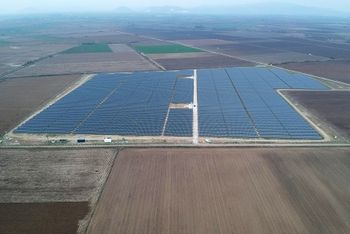 The juwi Group continues its successful development in Greece: juwi Hellas has constructed, commissioned and put into commercial operation a 9MWp PV plant located in Central Greece, near the town of Karditsa, for ATEN Energy SA, a company of Hellenic Petroleum Renewable Energy Sources S.A. (HELPE RES) for which juwi has already realized three solar projects of a total capacity of 8,6MW at the end of 2017.

Construction start for the 9MWp project was in July 2018. In less than 4 months juwi built the ATEN solar park on an area of 14 ha with more than 27.000 solar panels. The plant has been successfully connected to the grid on the 18th October and since then it is producing clean energy. With an expected annual output of 13.500 MW/h the plant will reduce the CO2 emissions by approximately 8,800 tons per annum.

As EPC contractor juwi Hellas has been responsible for the engineering, procurement and construction and juwi will be also responsible for the operation and maintenance of the plant for the next two years. With the technical design juwi set a milestone: It is the 1st 1,500V PV plant in Greece. The design allows reduced system costs i.e. for inverters, junction boxes and cables resulting in cost efficient and attractive solar projects. “This is a landmark for juwi Hellas” said Takis Sarris, Managing Director of juwi Hellas, pointing out that "not only it the biggest plant that juwi has ever built in Greece, but it is a point of attraction for investors, utilities and universities since it is the first of its kind in Greece”. The plant has been certified according to IEC 62446- 1:2016 by TUV Austria.

juwi Hellas is successfully realizing solar plants in Greece since 2008. So far the company put more than 50 utility-scale PV power plants with more than 100 MWp into operation.