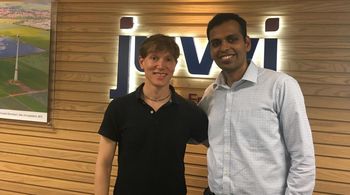 Raghuram Natarajan (right), currently Director of Commercial Management for the Region, will take over the position of Regional Director of Asia Pacific from Amiram Roth-Deblon.

Today, juwi is one of the leading companies of the solar industry in Asia Pacific with subsidiaries in Japan, India, Thailand, the Philippines and Australia. So far, the APAC-Team has realized or is in the process of building solar projects with an installed capacity of more than 500 MW. juwi’s profitable development in the region enabled the Singapore office to invest into innovations and to further increase the company’s own project development activities. An example for this is the world’s biggest off-grid PV-Diesel-Solution with battery storage facility at the DeGrusse Mine in Australia. The mine is owned by Sandfire Ressources and is scheduled to be fully operational by March 2016.

His successor Raghuram Natarajan joined juwi in 2010. Initially from Germany, and then from the Singapore office he significantly expanded the Asia-Pacific business jointly with Amiram Roth-Deblon. First Raghuram Natarajan was responsible for the business development in the region. He then gradually took over responsibilities including the operational, financial and commercial management of juwi’s activities in Asia Pacific. This included a wide array of responsibilities from negotiation and closure of key EPC projects to the establishment and controlling of various subsidiaries and joint ventures in the region.
Raghuram Natarajan combines more than nine years of experience in the renewable energy industry with specific expertise in Asia Pacific through his extensive network and his proven track record of taking on senior management positions within the company. Parallel to his tasks at juwi, he graduated from London Business School, Hongkong University and Columbia Business School and holds an MBA degree.

“We would like to thank Amiram Roth-Deblon for his very successful work in the Asia-Pacific region and wish him and his family a relaxing and inspiring sabbatical”, says juwi COO Stephan Hansen. “We are delighted to nominate a proficient successor from our local management team who guarantees a continuous development in the region. We wish him and his team great success.”