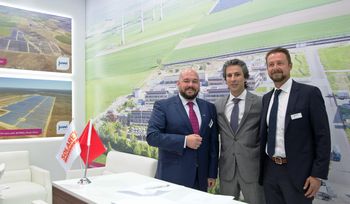 The German juwi group, one of the world’s leading project developers in the field of renewable energies, is expanding its footprint in the Turkish renewable energy market. After having installed a 7.4 megawatt solar energy plant by the end of last year in the city of Denizli, about 200 kilometers northwest of Antalya, the company is now about to construct 18 solar parks with a total installed capacity of 18.6 megawatts (DC) for the Turkish Koyuncu Group. The Koyuncu Group’s investment is about USD 23.5 million.

Representatives of juwi and the Koyuncu Group closed the deal at the Solarex trade show in Istanbul a few days ago. Commenting on the deal, Turkey General Manager Korhan Göğüş says: “We are pleased to build the solar parks for the Koyuncu Group. The Turkish energy market offers great potential for renewables and we are just at the beginning of a long road, in particular with regard to the country’s COP21 target (United Nations Framework Convention on Climate Change, 21st Conference of the Parties) for solar energy.”

The target set by Turkey at last year’s COP21 summit was 10 gigawatts. As of March 2016, only 365 megawatts of solar power have been installed in the country. Market analysts estimate the size of the Turkish solar market to be USD 10 billion. “juwi is well-positioned in this developing market and has an extensive pipeline of potential projects and will successfully realize more projects in the future,” Korhan Göğüş says.

This year, juwi’s subsidiary juwi Yenilenebilir Enerji A.Ş. will put into service the 18 separate (unlicensed) solar energy plants for the Koyuncu Group. “Half of the 18 projects will be installed in Konya and the other half will be installed in Nevşehir,” Ibrahim Koyuncu, CEO of the Koyuncu Group, states. Konya is located in the Central Anatolia region, some 300 kilometers north-east of Antalya, Nevşehir about 200 kilometers north-east of the city of Konya. “We will start constructions in summer and aim to commission all plants by the end of 2016,” Ibrahim Koyuncu further says. “We are expecting a total generation of 31 million kilowatt hours per annum. The investment amount planned to be spent for the plants is approximately 23.5 million dollars.”

juwi has been active in Turkey since 2014 and is already considered as one of the top foreign EPC contractors in the country.

END_OF_DOCUMENT_TOKEN_TO_BE_REPLACED

Solar power plants are located in the Ishikawa prefecture. Both were planned by joint venture… more